Along with being the site of the 2014 U.S. Women’s Amateur Public Links Championship, The Home Course has hosted numerous regional and national championships, including serving as the companion course for Chambers Bay for the 2010 U.S. Amateur and the 2021 U.S. Amateur Four-Ball, among many others.

Established in 2015, the “Four-Ball,” as it is known, is the newest USGA championship and replaces the now-retired U.S. Amateur Public Links Championship which was established in 1922.

Known by many as better-ball, or the shortened best-ball, four-ball is a widely popular format. In 2012 alone, state and regional golf associations in all 50 states conducted more than 150 championships using the four-ball format. It has been utilized at the Ryder and Solheim Cups. And if you drop by any course, be it public or private, you’ll likely see it being played by most groups. 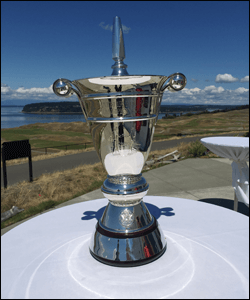 But until 2015, the USGA had not conducted a four-ball championship.

The rules of four-ball call for each team – or side – to be comprised of two players. Each person plays their own ball and the lower score of the side is counted for each hole (so if Player A scores a 5 and Player B scores a 4, the side’s score is a 4).

At the U.S. Amateur Four-Ball Championship, each side will play 36 holes of stroke play to reduce the field from 128 teams to the lowest 32 for match play. Like other USGA championships, the match play draw will be seeded according to stroke-play scores. Match play will then be contested over the final days of the competition to determine a national champion.

The rules for four-ball are essentially the same for both stroke and match play with a few nuances, one being teammates and their caddies can offer advice to each other, something not seen in a singles match. The team aspect is what makes four-ball such a popular format among recreational and elite golfers.

And now, the USGA has a national championship to support it.

The 38th U.S. Women’s Amateur Public Links Championship held at The Home Course in July of 2014 was a huge success and received accolades from all around the world. See below for videos and photos from the remarkable week…

Events Held at The Home Course

Since opening in 2007, The Home Course has been fulfilling its mission by hosting numerous regional and national championships.

Connect with us
Close